Nudity perspective from our first parents 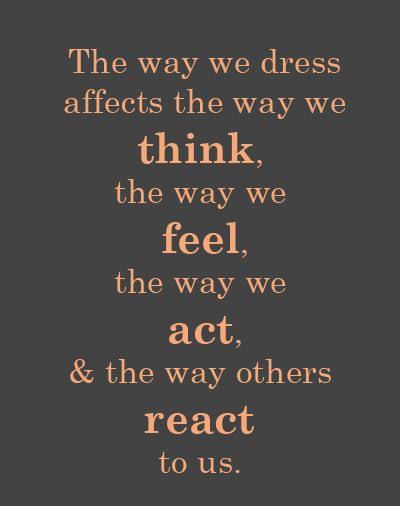 From a biblical perspective, you can almost understand or agree that God was ok with us being naked. Take the animals for example, they are comfortable with their body with no trace of shame because they don't have the awareness of what should or should not be. According to Psalms 139: 14, we have an attraction by the sight that even the angels lusted for. We as God's perfect work are a sight to behold in awe. GOD could have easily made Adam some clothes from animal skin the very minute he was created without Adam understanding its purpose. Let’s say if it was for covering his shame, or their shame, it would be purposeless since they had no awareness of their nudity; no sense of judgement of what is good or bad (no wisdom to identify good and evil initially). Maybe if they hadn't eaten from the tree, we would have been naked too, or clothing could have popped up in Gods mind at some point so He would have instructed Adam to make something just as He instructed him to name the animals.

But this knowledge was hidden from Adam and eve. In Gen. 2:23, Adam said this is now bone of my bone & FLESH OF MY FLESH. This acknowledgement Adam made shows that he was aware of his body but unaware of its appearance. He did not know if he was right or wrong to appear naked, the implications of exposing his nakedness and the feeling of shame that comes with it—
Genesis 2:25 KJV
"And they were both naked, the man and his wife, and were not ashamed."

Genesis 3:2-5 KJV
"And the woman said unto the serpent, We may eat of the fruit of the trees of the garden: [3] But of the fruit of the tree which is in the midst of the garden, God hath said, Ye shall not eat of it, neither shall ye touch it, lest ye die. [4] And the serpent said unto the woman, Ye shall not surely die: [5] For God doth know that in the day ye eat thereof, then your eyes shall be opened, and ye shall be as gods, b knowing good and evil."

Eve desiring to know more ate of the forbidden fruit with Adam. From the moment they ate the fruit, the first judgement of good and evil they experienced was their nakedness. Let us not forget that they were the only ones in the garden but when they discovered through the knowledge they received that they were naked; they suddenly realized they shouldn't expose themselves hence they found fig leaves and made aprons—Gen. 3:7. When God called on Adam, he responded (still on his apron) that as he heard God's voice, he hid because he was "naked" from the same God who created him. Gen. 3:9-11—confirming the knowledge they got from eating the fruit of good & evil.
In their heart, they thought that since they were naked, no one should see their features because they were sensitive and appealing to the eyes. They were conscious of each part of their body and thus covered them.

This is the TRUTH according to genesis 3:21 in which God himself clothed them from themselves and himself. Being naked created a sense which proceeds from the judgement made through the fruit of good and evil. These thoughts which are disturbing, came forth from self-inspection and realization that they were naked and hence should be clothed.


Nakedness was truly a symbol of lack of knowledge but then again when we get to heaven and when we dwell with God for eternity, we wouldn't again be naked. But look at what God says in the book of Revelation regarding clothing:

“After this I beheld, and, lo, a great multitude, which no man could number, of all nations, and kindreds, and people, and tongues, stood before the throne, and before the Lamb, clothed with white robes, and palms in their hands;” – Revelation 7:9(KJV)

In the eternal state, we will be clothed in white, not naked. We will once again be completely innocent from sin, yet we will not be naked.

Being half or fully naked and displaying your body without shame was once an innocent thing done without shame or fear but the knowledge of the fruit has brought seeds into every human’s heart coated with self-awareness. Most people like the feeling of showing some skin or all the skin, wearing " fashionable" clothes as we call it. This reveals the skin from the neck to the waist, some of these clothes exposes the breast while some reveal the male manhood (largely shown) etc. These things are beautiful with the right tailor, they will blow your mind or provoke you.

But let’s think about it, we have lost the right to innocence from the garden. You can't wear what you like and allow another human being lust to sin because it’s what you desire while some will say it makes them look appealing, the common words used "sexy”. But carelessly at every corner, Christians dress so provokingly, forgetting it’s a sin to behold the nakedness of another. They do it with so much joy. Even when you correct this impression wickedly, they say someone has a psychological or spiritual problem for being carried away by nudity when scriptures have addressed nudity as a shameful act.

In our world today, humans purposefully seduce each other with their sexual appearances. They go half or fully naked exposing the body without thinking about the effect it has on the minds of others. These days we promote these things, provoking God day by day. This attitude is transmitted from generation to generation. The act of appearing naked or half-naked can bear iniquity in the heart.

Exodus 20:26 KJV
Neither shalt thou go up by steps unto mine altar, that thy nakedness be not discovered thereon.

Exodus 28:42 KJV
And thou shalt make them linen breeches to cover their nakedness; from the loins even unto the thighs they shall reach:

Yes, God was talking about the priest but let’s analyze the dress, these men were wearing lengthy garment but because they go up to the altar. God instructed them to make breeches. We are clothed to cover our shameful parts. Through our first parents, humans have analyzed that it is wrong for man to be exposed. 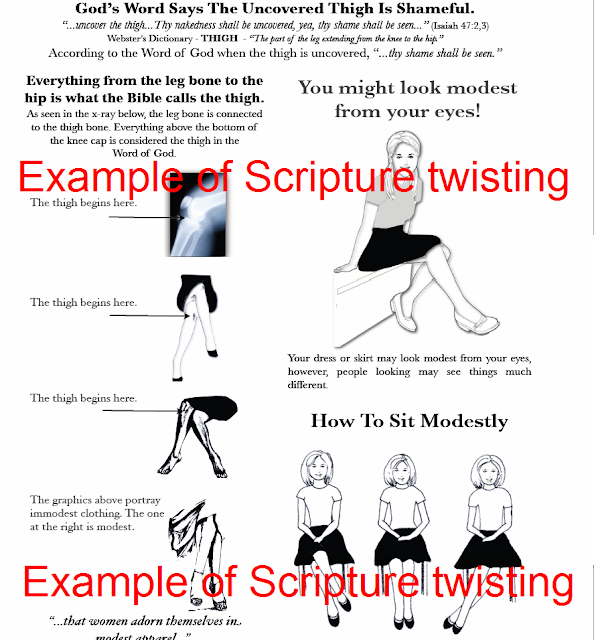 Don’t be deceived by people who make statements like "Christianity is from the heart for that purpose you can appear any way you choose to", hence they go almost naked. Check to make sure every outfit you wear is DECENT. Reprove it if it is revealing any sensitive part of your body that shouldn’t be seen at all.

We do not dress for ourself satisfactory pleasures alone but we do so to also please God and not for the pleasure of man and its daily trend to expose the human body and to please its sight. This will only lead to sin 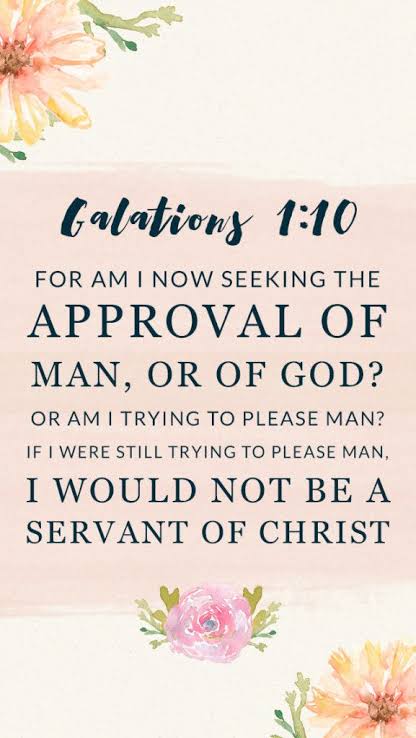 Popular posts from this blog

Clarity Of Our World Through God's Eyes

The tale of God and humanity is a multifaceted one, However, what intrigues me the most are stories which exemplify His humility and love, which overcomes pride and hate in man. Our story with God is constantly rooted in being selfless, as a child .The workings of God are bound by principles: principles stipulated by Himself, to guard and guide; principles binding for all ages. As He has said: “ Heaven and earth will pass away, but my word shall not pass away”. Oh what humility for a King and Creator to be subject to laws He crafted! Pride however, has separated God’s people from Him, through humility and submission to the influence of the Spirit of truth – the Holy Spirit – the only way to reconcile themselves back to God. (Matt. 18:3-4). In as much as God has the power to give us the perfect life He wants for us [even in this corrupt world,] the earth is presently an eternity away from His definition of perfection. The world we see today has become such a lesson ground for
Read more

Cultivating the act of reading 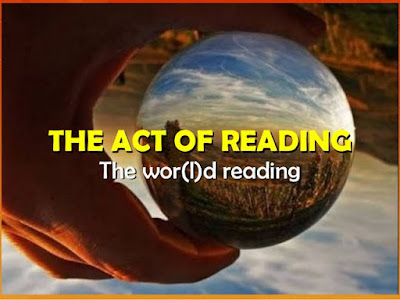 Children are born, devoid of understanding and knowledge hoping to learn about the world they live in. It is left for our parents to help them seek the foundation of all knowledge. But our parents were devoid of such understanding because they were not enlighten by true foundation. Many of our parents died not tapping into true knowledge because of their negligence to books and a spoken word from people who have studied life. Treasures of the world lies in a written paper so also the secrets of the world lies in the heart and mouth of a personality but the best means to pass these treasures to the world is by a written note for anyone who desires to have them will seek for it in the books. Our Ignorance to study books, to find information and knowledge affects our effectiveness to the world. Alot of people have been inspired by God to write mysterious writing that only a few can explain but this words are buried in the life of some people because they hate the thought of reading a b
Read more

DELIVERED with TRUTH but NOT set FREE.

May 06, 2021
There was a time in my life, I questioned why I would sin against God and go back the next week to ask for forgiveness then dream of all the things I would quit physically but mentally still invited. At some point i grew bitter,i would medicate, talk to myself about how i am the biggest joker of the year for not having a stand, sometimes i would cry or laugh at myself .when the day is over i would calculate all the things i wasn't meant to think, act, and Speak. I distanced myself from asking for forgiveness from God because I knew I wasn't sure to be faithful the next week. I asked some persons why we would willingly sin and still go back to God when we could quit most of the sins we asked for forgiveness unfortunately their answers did not justify the reasons. I finally discovered I cheated on God countless times because I could and I was enslaved in the mentality that the love and blood he shed will speak for my sins and save me from hell. A misguided conception  God's l
Read more